There were very few people reading AND writing back then. The “Two Way Web” was just getting started with open source and blogging software and virtual hosts making it so people could publish more easily. MacManus was definitely one of the must reads at the time, although even finding new sources meant following links in blogs that you already read.

Here’s a screenshot of his link to the Internet Archive’s Wayback Machine: 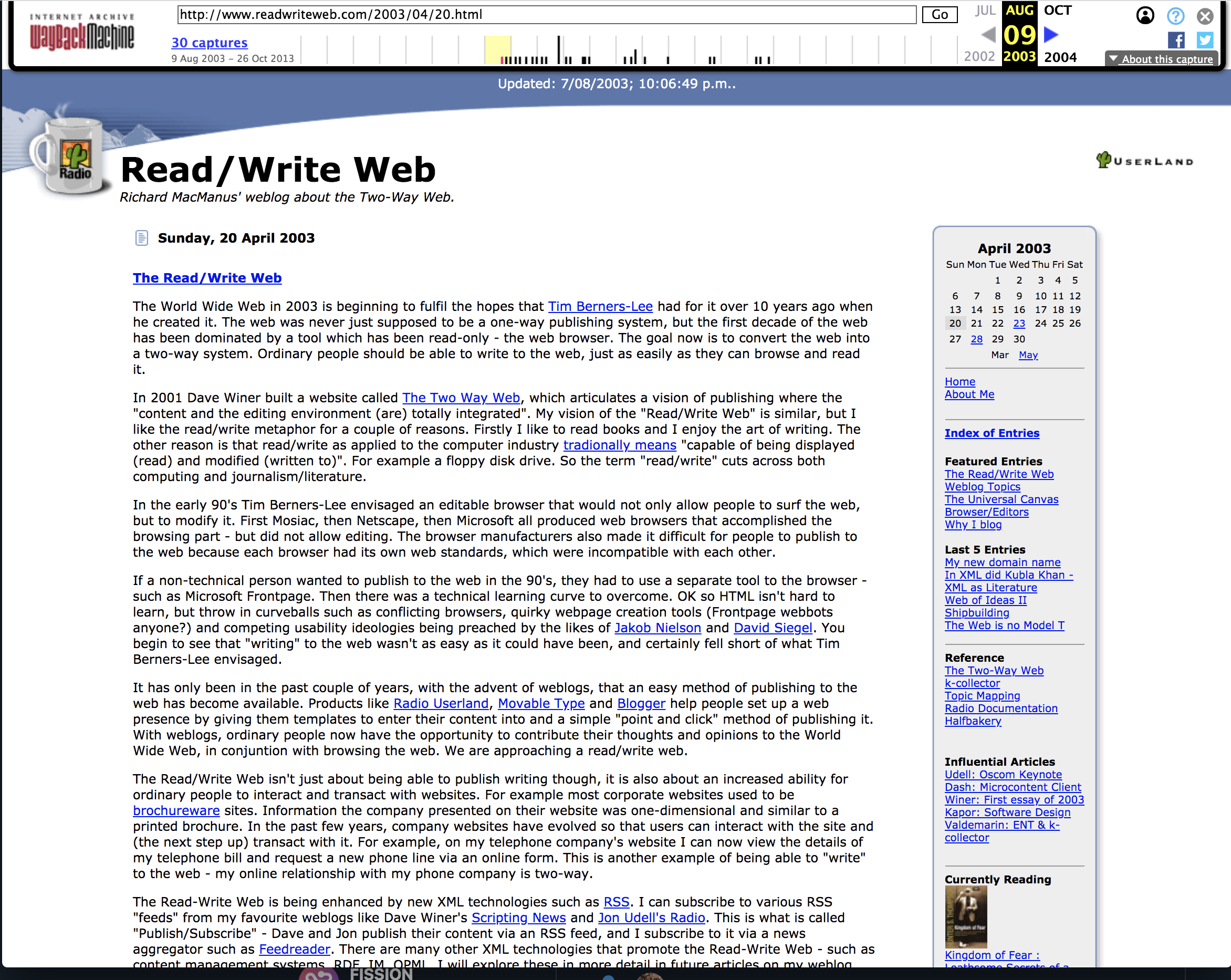 Which, of course, got me to thinking about what my blog looked like at the time. I was still living in Ottawa, but was about 4-5 months away from moving back to the west coast.

I was running Drupal, had a theme I had customized myself, including a custom header image for ‘B. Mann Consulting’ by my friend Troy. Yeah yeah – I really should have picked a better domain name!

Here’s the front page of bmannconsulting.com on April 22nd, 2003:

(and clearly I didn’t know enough CSS to figure out how to fix that image overflow!)

Because hosting was complicated, a few friends blogged on my site. On the sidebar, various RSS feeds and blogs got sucked into the site. In part for using as a casual feed reader, which then also made it really easy to “reblog” directly on the site.

That link to SARS on the sidebar looked interesting. Turns out Dave Smith blogged about SARS. Good for him, his post from April 17th, 2003, is still online (no longer running Drupal, but archived as an HTML export).

Strange to be seeing comments from me and others in there on this very relatable topic.

I’m back to using [[IndieKit]] with this site, a personal [[Micropub]] server that lets me publish to the Git repo where the source of th...

Setting up a new blog and domain on Micro.blog

I’ve decided to use [[Micro.blog]] directly for my short form, social posting. I’m happy with Micro.blog’s approach to owning your conten...

I should be all switched over to using IndieKit, a micropub server that lets me use various IndieWeb technologies to easily publish to my...

*actually my second post, since I posted a simple one about tagging in order to troubleshoot why this post wasn’t working. I’ve been savi...

The New Year is kicking off with a bang. Bootup Labs moved into our new offices on Sunday (Cambie at Hastings, the Flack Block - come v...