We failed at making the Vancouver 2010 Olympics an Internet showcase

There, I said it. I really needed to get that off my chest. It’s 2010. We don’t have hoverboards, but we sure as heck should know how to run large scale interactive websites.

I think I have some unique perspective on this. I’m a technologist that has been experimenting with cutting edge code and devices for over a decade. I was at the 2006 Olympics in Torino, where we put on a symposium around “The Olympics and Web 2.0”.

The ticket sales site crashed in Torino back in 2006. I didn’t expect that it would crash horribly in 2010. 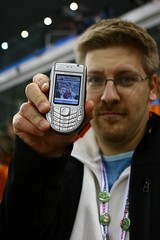 In Torino, we were using Nokia phones, ShoZu, and cheap Italian 3G connectivity to take pictures and upload them to Flickr in realtime. I remember Darren Barefoot watching from back home. These were isolated incidents.

Today, just hit reload on the #van2010 tag on Twitter, and you’ll get a constant stream of on the ground and watching from afar commentary. With links, photos, and hashtags a plenty. This may very well go down as the first “Internet” Olympics with this kind of activity.

But I think we blew it. The “we” being CTV, CBC, and most definitely VANOC initiatives. OK, perhaps I shouldn’t expect much from top down IOC controlled bodies who believe in the “magic of television”.

But CBC, for 4 years, has known this is coming. What kind of infrastructure have they put in place? A “blog” called The Hub, where they invite comments (I put blog in quotes because there is no RSS). No aggregation of activity, no submission of news stories, no geo-tagged map of interesting stories / photos / tweets happening across the Vancouver region.

And that’s just a beginning. I thought those would be table stakes. Single services like Twitter or Flickr cover the majority of those technology needs out of the box. It’s not like CBC would have had to invent a bunch of this from scratch!

Why am I so annoyed? Well, I’ve personally been talking to people about the possibilities since I came back from Torino. CBC lost the bid for official coverage rights, meaning that they had almost $1B that they wouldn’t be spending on licensing. They could own the Internet experience while CTV was doing traditional broadcast like suckers. Instead: a handful of Twitter accounts and an interactive web presence that simply isn’t up to today’s standards.

Anything else I have to add would just end up being more of a rant. I’m writing this commentary singling out CBC because I actually care that our Canadian public broadcaster evolve.

Will the Summer Olympics in 2012 be any different? What would you build to help support and highlight Internet coverage in coming years?

I wrote a blog post back in 2017 about my method of archiving iPhone photos to Amazon S3. Today, I had someone ask me about what my curre...

My last post was about dealing with my Flickr photo exports and experimenting with them in Jekyll. Now that I’ve got the zip files all ba...

The deadline for deletions of photos from free Flickr accounts is early February1, so I’ve requested the backup of my account2. The two “...

I’ve wanted to have photos that I take – which at this point are all from my iPhone – uploaded to some place under my control. I also wan...

It’s that time of year again, when I face the same question: my Flickr Pro subscription has expired, and I need to pay so that all my pho...

I’m the host at the iQmetrix offices today for the Open Data Hackathon put on by Jesse Heaslip and company. I’m also a judge at the endy ...